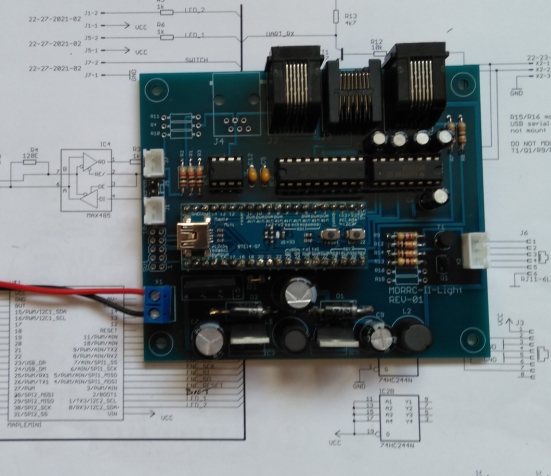 MDRRC-II is based on a cheap Cortex M3 board (STM32) including touch display and some extra components it is possible to control your digital rail road with DCC (14/28/128 speed steps functions F0..F28) and Maerklin Motorola (15 speed steps and functions F0..F4) locomotive and accesory decoders.

If a dedicated decoder is required you might want to use the code presented here for Atmel Tiny2313, Mega8(L), Mega16 , Tiny25 / 45 / 85 or Tiny13. The code supports Maerklin Motorola turnout handling and (basic) DCC turnout handling. This library is NOT intended to be used with Arduino!

MDRRC-II Lite is a “ripped” version (very cheap) of MDRRC-II based on a  STM32 Maple Mini compatible board..

Based on an Atmel Mega8 12 red/green signals can be controlled using MM or DCC. Only schematic and HEX files are available.

With an Arduino Mega2560, an OLED I2C display and RC5 receiver a converter is created for RC5 compatible remote controls (like the Uhlenbrock Iris) to a XpressNet master device. Using the interface locomotives and turnouts can be controlled with the remote control.

Yes, another Arduino based servo decoder but now with a Mega328P processor instead of an Arduino module to control 8 servo’s.

With an ESP8266 module, a display and some other components a simple Wifi Manual Control can be made for the Z21 protocol. See also the build version of Paul.

More or less the same as the WMC but now for the XPressnet bus and based on a  STM32 Maple Mini compatible board, the XMC.. See also the build version of Paul.